Addiction Isn’t Easy For Teens Or Their Parents

My 20 year old son has struggled with an addiction issue for the last couple of years.  He has mainly used weed, alcohol and more recently, Percocet.  As parents, we knew he was using, but we were naïve to the extent of his usage and the problem it had become until a couple of months ago.

My son has a long history of mental illness, and the last two years with that have been particularly rough.  I believe his addiction issues began because he was “self-medicating”.  He has an addictive personality, so his usage quickly spun out of control.  As a parent, it is extremely difficult to watch and even more difficult to know how to intervene.

Luckily, a “big” issue happened that allowed us to give an ultimatum — jail or treatment.  My son chose treatment.  However, we learned that he didn’t qualify for residential treatment (which is what he needs), because marijuana isn’t considered a serious enough drug problem to warrant residential treatment.  They are legalizing this drug in other states.  He then agreed and qualified to be hospitalized in a behavioral health unit.  From there, they recommended a sober house.  The sober house was full, so he transitioned to a homeless shelter, and 2 weeks later moved into the sober house.

We felt hopeful for the first time in years about his future.  Until we got a call last Friday night that he was being kicked out of the sober house for testing positive and using marijuana.  While I know that addicts can slip up, I certainly didn’t expect it so soon in his recovery.  We were out of town at our new lake home for the first time, so it was especially devastating news.  He could not get back in the homeless shelter (they don’t allow people back within 6 months to keep it from being a revolving door).  Our son had no option but to stay with another man from his sober house who was kicked out for using alcohol and was continuing to use.

Our son reverted back to the mean, lazy young man he had been.  He didn’t go to his job for two weeks, and was verbally abusive.  Last Friday we took his car away, so that he would be safe and also not injure others.  He then agreed to go on a 12-step retreat.  I hope and pray that retreat was as life-changing as he claims.  He did get baptized in the lake after, which again makes us hopeful.  He has been living with my mom, going to work and staying sober for the last 6 days.  IF he tests negative again on Tuesday of next week, he will be readmitted to the sober house.  He will have tighter restrictions including attending 30 AA meetings in 30 days.  He also has to repeat the 30-day buddy system (so he can only leave with someone else from the sober house other than work).

We pray this bump in the road taught him a lesson, and that he commits to a sober life.  For this to happen he needs to “divorce” the friends he used with in the past.  He has half-heartedly agreed to do this, and needs to commit so he can’t fall back on them. 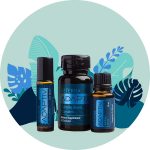 Mental illness and addiction seem to go hand in hand, and are a difficult duo to witness and manage as a parent.  We pray daily, try to enforce natural consequences, and seek help whenever we can.  Stress has been a constant the last several months in our house.  We try to practice good self care with Epsom salt baths, gratitude journaling, reading a daily devotional, daily movement and stress-reducing essential oils (I am drawn to Adaptiv and Forgive lately).

I am sharing our story in hopes it helps others in this situation not feel alone.  Reach out to me if you have a story to share, or want another parent to chat with who understands.  If you’re the praying type, please keep my son and our family in your prayers.