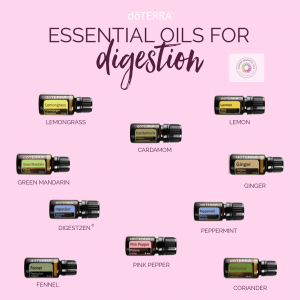 Digestive Health is so important for our overall health, but also largely controls how we feel, in general.  There are SO many essential oils that can support our digestive health.  I will highlight some of my favorites in this blog article. 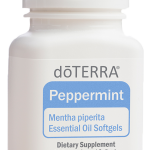 Peppermint has been used for hundreds of years to soothe digestive upset.  Indigenous people used peppermint long ago to alleviate occasional stomach upset.  More recently, it has been diffused or put on hospital gowns for patients who experience nausea post-surgery or during chemotherapy infusions.  It has also been studied for it’s effect on lower GI issues when used with an enteric coating (and doTERRA recently came out with an enteric coated peppermint softgel for just such issues).  I also recommend diffusing it in your car for people who deal with motion sickness.  It has an all-around soothing effect for digestive health.

Ginger has also been used for many years to alleviate stomach upset.  When I went on a snorkel trip to the Great Barrier Reef (which requires a long boat ride over the ocean), we were offered Ginger Tablets to prevent motion sickness by the crew.  My mother-in-law was given this by her palliative care nurse when she was experiencing nausea from her immunotherapy.  She ran it in a diffuser next to her chair, and it helped immensely.  My mom likes the Ginger Digestive Drops to settle an occasional sour stomach. 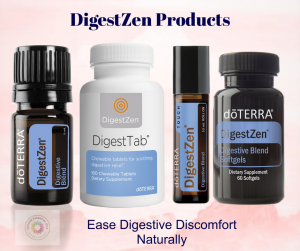 DigestZen is doTERRA’s blend synergistically made for all things digestive.  This blend features Peppermint and Ginger that I already mentioned, along with Star Anise, Caraway, Coriander, Tarragon and Fennel.  This blend works amazing in my opinion; however, it has that black licorice scent that people tend to either love or hate.  It can be applied topically diluted with FCO to the lower abdomen for stomach and GI issues and to the chest for acid type of issues.  It can can also be applied to the feet, which is an especially good option for people who don’t care for the scent.  It is also recommended for internal use and can be added to a glass of water, taken sublingually under the tongue and added to a veggie capsule for you own natural remedy.  Personally, I think it is most effective internally, so that is typically the way I use DigestZen.  DoTERRA also makes a chewable tablet called Digest Tab that has DigestZen essential oil infused with Calcium Carbonate for an effective acid-neutralizer.

Celery Seed is a newer oil to doTERRA and has been proved to improve digestion.  You may have heard of juicing celery?  Celery Seed essential oil is much more convenient (no juicer required) and more cost-effective, too.  It is best taken in a veggie capsule or a drop or two added to a smoothie (it doesn’t taste the best in plain water).  I have heard some amazing testimonials from my customers who have added this into their digestive support routine.

Pink Pepper is a lesser known oil, but no less effective for digestive support.  Pink Pepper has also long been used by indigenous people, and the pink pepper tree is considered sacred by the Incas.  This precious oil is known to be soothing to the nervous system and digestive system.  I would recommend using it internally in a veggie capsule or applied to the bottoms of the feet for digestive support.

While there are many essential oils that can benefit your digestive system, these are a few of my favorites.  I hope you try them, and if you do – leave a testimonial in the comments on what works best for you.