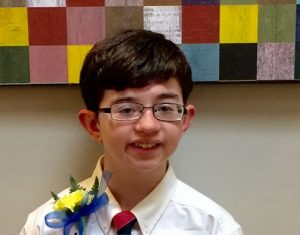 Our son, Danny was adopted at birth weighing only 4 lb. 9 oz. even though he was full-term.  He was a beautiful, long eye-lashed and smiling baby, who despite his low birth weight, passed his APGAR test, and was sent home with us less than 48 hours later (because his birthmom did not have insurance-law in the state of Nevada).

Danny As A Baby

When we arrived home to Wisconsin with Danny, our pediatrician directed us to feed Danny every 1.5 – 2 hours, and to wake him after 3 to eat if needed.  He did not have a large appetite, and getting him to eat enough was our biggest challenge.  Danny also had many frequent illnesses and was hospitalized at 6 months for RSV and 9 month for rotavirus.  He was not sitting up at 6 months, but our pediatrician felt he was behind due to his prolonged illnesses and would catch up.  At 10 months Danny could sit up, but he just couldn’t keep his balance like our other son and would topple over.  We returned to our pediatrician, and she said she also had concerns there was more going on.

We were referred to a developmental pediatrician, who ran genetic testing which turned up nothing, and then gave us a diagnosis of Fetal Alcohol Syndrome.  This explained Danny’s small stature and difficulty feeding, but did not really match his extremely sweet and happy disposition.  He also advised us to have vision and hearing checked, which was such a blessing.  We learned that Danny was extremely near-sighted and got him glasses at 13 months old.  Car rides used to be stressful, as riding in the car was the only time Danny would cry.  After he got his glasses, he never cried in the car again (we think because he could see what was passing him by).  We later learned he had peripheral field loss, which caused him to frequently run into objects and frequent falls. 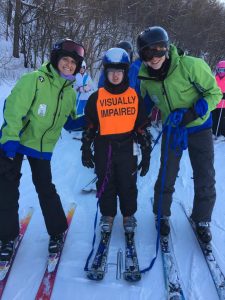 Danny wore braces on his legs called AFO’s, due to high tone and being unable to walk – it is an understatement to say he didn’t like them, and he became very skilled at wriggling out of them!  They helped him immensely, and broke up the high tone pattern throughout his body (arching) and he started walking at 26 months.  He moved to small orthotics in his shoes to support his ankles, which he still wears today.  He started receiving Birth-to-three services with O.T. and P.T. at about 15 months old.

Danny was a very happy baby and seldom cried unless he was sick – that is how we would know he wasn’t feeling well.  He had many ear infections and colds that would move to his lungs after having RSV.  We tried everything we knew to boost his immunity and keep him healthy (nutrition, chiropractic, therapy, and consulting with our pediatrician).  Ear infections, frequent diarrhea and colds were quite a problem for a number of years (Danny has had 7 sets of ear tubes and his adenoids removed to help with the ear infections).  My husband is a chiropractor and can often help with ear infections in kiddos, so this was especially hard for us.

At 4 years of age our pediatrician recommended we see an endocrinologist due to Danny’s small size and lack of appetite.  We started him on growth hormone and he grew from wearing a size 18 month clothing to 3T within the first year.  He started eating much better, and gained muscle as well.  He took daily injection of growth hormone until he was 17.  Getting him to eat a variety and enough foods was our biggest challenge in the first four years (he limited himself to only crunchy textured foods and water, and refused formula or milk from 9 months on).

Around 6 Danny began getting frequent canker sores, and they were debilitating.  They were huge, painful and would last 7-10 days during which he would miss school.  He got 3-5/month and did not each much or allow us to brush his teeth when he had them.  This started another cycle of doctoring to try to help him.

At age 11 we went to a new developmental pediatrician who again referred us for genetic testing.  The initial testing did not turn anything up, and our insurance company denied the expensive next step of genetic genome testing.  At a follow-up appointment with the geneticist, we learned the possibility of Danny having Cohen Syndrome.  Our geneticist brought in a more experienced geneticist to lay eyes on Danny.  She had diagnosed two other young adults with Cohen Syndrome, and after learning Danny got frequent canker sores and had a low white blood count, she asked us if he was really friendly?  I told her I had nicknamed him Mr. Friendly, and she told me she suspected Cohen Syndrome.

The only question I asked was about life expectancy, which she said was normal if the white blood count/infections were controlled.  I will never forget that drive home, calling my husband and having him drop everything at work to Google Cohen Syndrome.  When we read the description and saw the pictures of kids with Cohen Syndrome, we knew we had found a match for Danny.  Our insurance company did agree to pay for genome testing to test for Cohen Syndrome and his diagnosis was confirmed “Cohen Syndrome exacerbated by Fetal Alcohol Syndrome”.

As hard as it is to learn that your child has a syndrome, it was also a relief.  It opened up doors of understanding and most importantly a Facebook group for Parents of a Child with Cohen Syndrome.  The connections and support through this group have been amazing.  We also attended the Cohen Syndrome Conference in Ohio in 2016 and 2018, and it was such a delight to meet other kids/adults with Cohen Syndrome.  They truly are the sweetest beings.  Prior to that we were able to meet Eli and his parents, and I cannot even explain how amazing it was to meet another Cohen’s kid – we could instantly see his sweetness, just like Danny.

Danny has been much healthier, and has only gotten 3 canker sores in the last year!  He missed 3 days of school last year compared to the typical 6 weeks!!  I became passionate about nutrition and natural health after the benefits we saw with Danny, and now teach classes to help others learn natural health technique safely and effectively.

Danny is verbal, and began speaking about 6 years old.  Previously, he used PECS, sign language and an augmentative communication device.  He has a very soft voice and is considered “understandable to familiar listeners.”  When he would cry waking up from a nap, company would ask how I knew he was awake.  I would say, “I heard him cry on the monitor”, but they never heard his quiet cry.  We started him on a “real food” diet in 2015 and also eliminated gluten from his diet, and his speech has exploded.  Our reason for the diet is to prevent the obesity that can come with Cohen Syndrome, but we have had the added benefit of increased speech and better eye contact.

Danny is incredibly social, and has many friends.  At school they tell us kids fight over whose turn it is to help him.  He participates in many sports such as Special Olympics, Challenger Baseball, adaptive hockey and adaptive downhill skiing.  He is always happy, unless he isn’t feeling well.  He is also very compassionate and will try to comfort anyone who looks sad.   He is a hugger and will hug anyone he sees over shaking their hand.

It is so difficult to describe Danny; he truly is such a special and sweet little boy.  We learned at the Cohen Conference that we are the only “known” people to adopt a Cohen’s child.  I don’t know how we got so lucky to be the parents of such a special boy, but we sure do feel lucky!